OPCFailover is a simple and effective way of increasing the availability of data to your business benefiting OPC Client applications. OPCFailover delivers redundancy without proxy servers, avoiding the complexities they incur.

With the user community enjoying a robust and dependable product it's been nearly four years since we released OPCFailover V2-2. Today we are proud to announce the release of OPCFailover V2-4. This version rolls up an internal V2-3 release with one behavioural change to the way OPCFailover connects and disconnects to/from the target OPCServers. 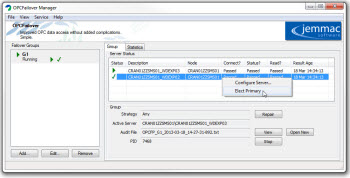 We are very confident that OPCFailover V2-4 builds upon the stability and robustness of previous versions whilst adding a refinement in the way OPCFailover interacts with target OPCServers.

You can download a trial version of OPCFailover and try all these features out for yourself.